I was fortunate enough to be invited for a week long residency with AMA collective and BOCS in Sicily, which I am truly grateful for.

Primarily based in Catania at the foot of Mount Etna I was exposed to elements I’ve never really experienced before. The location was beautiful and I was able to move and meet new people within the Arts in Sicily. This wonderful artist community provided so much to my understanding of the cultural differences in the arts in particular but also opened my mind up to the working practices of some wonderful artists who, in turn, took the time to hear about my practice. One particular day saw myself and a handful of artists discuss our work and processes for over 10 hours, learning from each other and willingly take on board what each other had to offer.

AMA collective and BOC’s provided me with so much during this time, helping me to explore my interests and build up a body of research which I can continue to push on my return. It was easy to be caught up in the cultural landscape but it was the volcanic landscape that fascinated me the most. The presence of Mount Etna was extremely evident in the surroundings as well as the skyline.

Mount Etna provided an element of creation and destruction simultaneously. Sicily was literally shaped by its activity as the culture constantly when through a cycle of destruction and renewal which continues to this day.

The location of BOC’s in Catania sits upon volcanic rock, as does most of the coast line. The volcano erupted many times of the centuries and each time the process extended the land mass outwards. As it created new land it destroyed what was sitting on the existing plain. While the lava stretched itself forward as a powerful unstoppable force the people began to build again on top of the new land created. I was fascinated with this process. Catania is built upon the volcanic rocks but is also created by the volcanic material. The bricks and mortar are volcanic ash and rock as well.

The abundance of this volcanic ash and its uses became interesting to me, a new material for me to explore but also thinking about the destructive/constructive of such a powerful object has provided me with so much food for thought. The creation of new ideas, performances and sculptural works has already begun.

The volcanic ash is so plentiful that I felt it could be the perfect material for a period of experimentation. The blackened sand like substance I felt would be a good aggregate for casting purposes and so collected some sample material and began an on location process of mixing with concrete and water, providing different results the outcomes where intriguing to say the least.

The image below shows 3 examples of the mixes 10:1, 5:1 and 3:1 with varying degrees of colour and structural integrity. Reactions with the contaminants provided different textural elements as well, the gritty textures provided by the aggregate increased with quantity like you would expect but did not flake off like I expected. The grey colour also only sat on the surface, once buffed down it was much darker in colour. 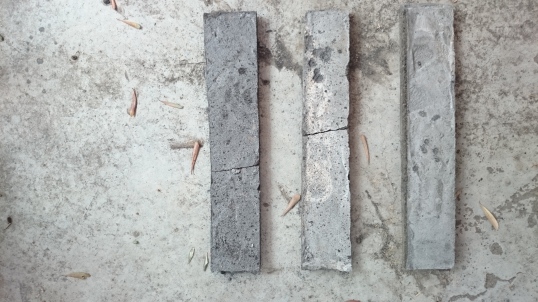 It is not surprising that this research led in to ideas that focused on the performative aspects of my practice. The theatrical aspects of the landscape and culture are  evident as soon as you step off the plane. This is what I’ve started to explore on my return from this residency. Using some material I brought back I’ve begun mocking up test experiments of larger sculptural works. These are demonstrating in abstract ways the effects this location has had on me. Creating scenarios of power and futility, indulging in personal memory/experience while looking beyond that to a history of destruction and reconstruction. 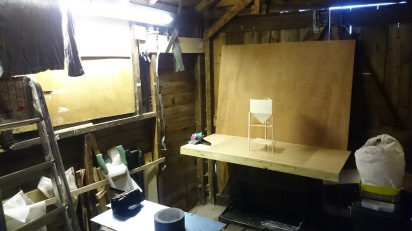